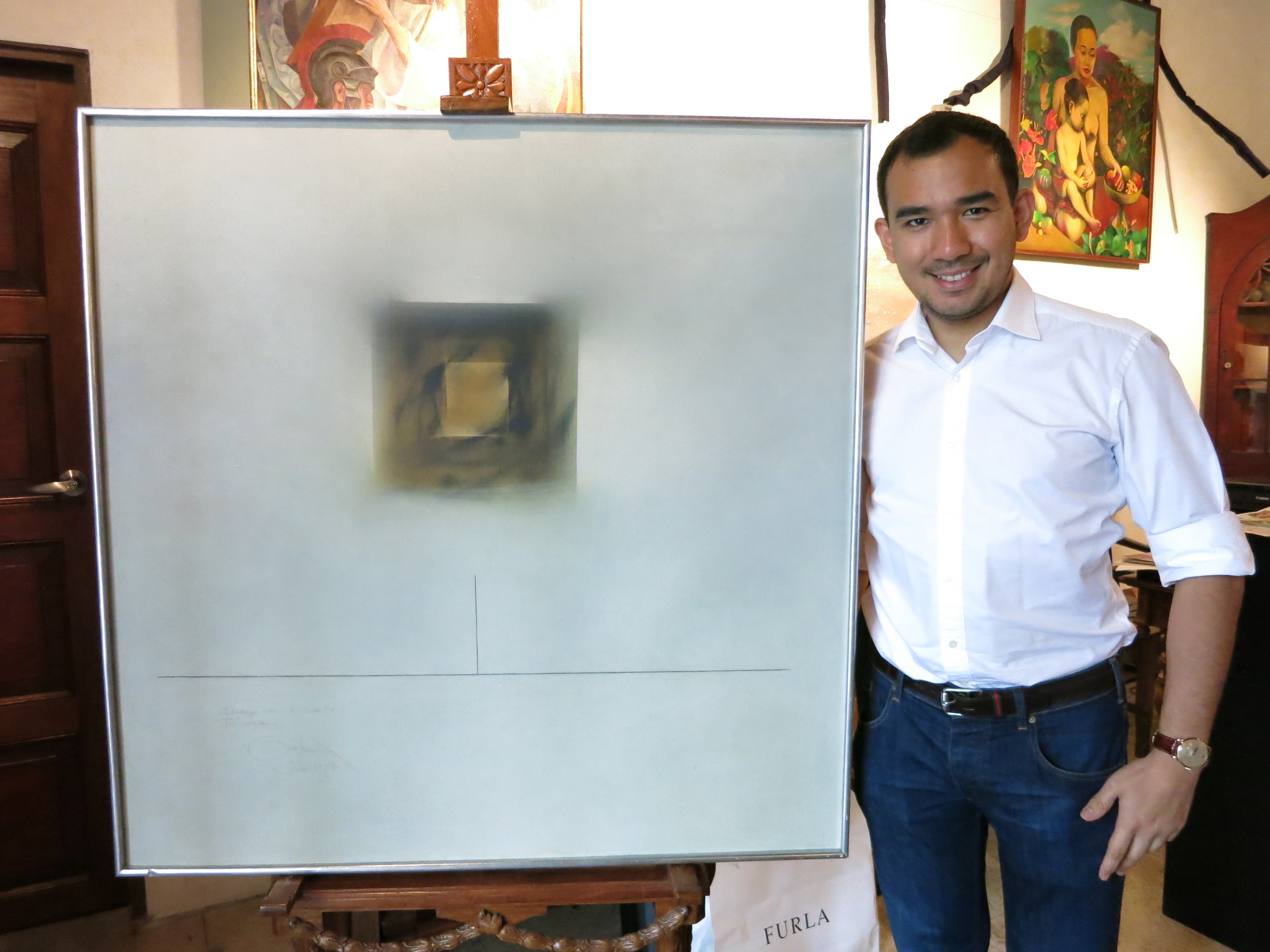 Art is an important foundation of Filipino history and culture. It has the power to move, encourage and above all, inspire. We believe in a society surrounded by the power of art to constantly engage in conversation with ourselves, others and society at large. We therefore believe in art education, the cultivation of its appreciation, and through it, our country’s growth and development.

Our mission is to make the best of Filipino art accessible to the world. This is why we have made it our mission to become the simple and convenient link between buying and selling these pieces of art. We understand the level of responsibility and trust required by this role. Hence, our pool of experts work hard from the authentication and documentation process, to each work’s storage and preservation, to the actual pricing and bidding, so there is little for you to worry about. Since 2010, we have specialized in finding important museum-quality and historically-important pieces of art. Our collections encompass Old Master paintings such as those by Juan Luna, Felix Resurreccion Hidalgo, and Fernando Amorsolo and the previous centuries; to modernist works by Hernando R. Ocampo, Anita Magsaysay-Ho, Vicente Manansala, Arturo Luz, Fernando Zobel, and Federico Aguilar Alcuaz. We have also earned the reputation of the best purveyor of Philippine antiques, from the pre-Spanish to the colonial times. Culturally significant furniture, ivory, silver, porcelain, rugs, jewelry, rare books, maps and flags as well as extraordinary documents that define us as Filipinos are among the gallery’s estate and heirloom offerings. Find what you love and take a piece of the country’s glorious history and culture with you.

No matter what the art work is, we want to make the acquisition or de-accessioning of it as simple and convenient for you as possible. Whether you seek Old Master paintings, modernist works, or contemporary pieces by younger but important artists, sculptures, tapestries, architectural details or one-of-a-kind finds; whether you are in the market for fine furniture, porcelain, ivory, silver, or gold from the various centuries, we can facilitate the process of finding, and owning that must-have piece to round out your collection — or to take the first step in beginning one. And if you are seeking the right home for your treasures, we are here to help you select the perfect forum to find one. You are welcome to attend our live auctions at León Gallery, bid on the phone or online, or place an absentee bid. We’ll be with you every step of the way, whether you prefer the excitement of a ringside seat or prefer to bid from the comfort of your own home. In addition to our auctions, León Gallery regularly organizes previews, both selling and non-selling exhibitions, as well as participates in Art Fair Philippines. Be our honored guest on these occasions to meet other like-minded individuals and to enjoy the burgeoning Filipino art scene. We also regularly publish art books in collaboration with curators and international galleries.

León Gallery first opened its doors in 2010, quickly gaining a reputation for specializing in museum-quality and historically important Philippine Art. It is also a purveyor of meticulously selected Philippine antiques, dating from the Pre-Spanish period to the 19th Century.
Antique furniture, Spanish-Filipino ivory and silver, precious Oriental ceramic and porcelain, rare carpets and jewelry constitute the gallery’s special heirloom and estate pieces. At the core of León Gallery’s expertise are works of the Filipino Old Masters, such as Juan Luna y Novicio, Félix Resurrección Hidalgo y Padilla, Fabian de la Rosa y Cueto and Fernando Amorsolo y Cueto. The Gallery has gone on to widen its field with the works of the Thirteen Moderns, including Carlos “Botong” V. Francisco, Anita Magsaysay-Ho, Hernando R. Ocampo, and Vicente Manansala; as well as leading lights such as Fernando Zóbel, Arturo Luz, and Federico Aguilar Alcuaz to name a few. León Gallery is also honored to offer almost all of the Philippines’ National Artists for the Visual Arts and Sculpture as well as the most exciting and important contemporary artists.

In 2014, León Gallery organized the landmark exhibition, The Jim and Reed Pfeufer Collection: A Four-Decade Friendship with Fernando Zóbel. Featuring 73 works, the show was a look into the mind and artistic process of the maestro, Fernando Zóbel, as seen through sketches, private correspondence, and significant works amassed by his close friends, Reed Champion of the Boston School and her husband, Jim Pfeufer.
In February 2016, León Gallery assembled the largest collection of works to be seen in the Philippines by an outstanding Philippine artist living in the United States. Alfonso Ossorio was a Filipino by birth, confidante of Jackson Pollock, and an influential member of the New York School of Abstract Expressionism. Entitled Afflictions of Glory: Alfonso Ossorio, it was also the first-ever exhibit of Ossorio works in the country and commemorated his 100th birth year.
This was followed by another milestone in June 2016: Filipinos in the Gilded Age: An Exhibition of Important Ivory, Furniture, and Paintings that assembled an astounding number of works from the turn of the century, including several recently repatriated masterpieces.
León Gallery led the way in the field of bringing the concept of ‘curated auctions’ to the country, with Two Navels. Inspired by the seminal work of Philippine National Artist for Literature Nick Joaquin, it sought to continue the dialogue on the question of Filipino identity. Opened in August 2016, it celebrated the eve of Joaquin’s 100th birth year.
As its first exhibition for 2017, León Gallery was privileged to present an iconic art collection with Trove : The Coseteng Collection, The Life and Art of Hernando R. Ocampo, 1945 to 1978. Seventy-four stunning canvases, watercolors and works on paper — many of which had never been seen in public — told the magnificent story of this legendary Neo-Expressionist.
Next, León Gallery partnered with the Asian Cultural Council (ACC) to mount The World Is Too Much With Us : José Joya for Art Fair Philippines in February 2017. Joya was the first Filipino grantee of the Asian Cultural Council, then known as the Ford Foundation.
The following month, León Gallery went on to present The Sons Return, an exhibit of two Filipino ex-patriate artists who would become two of our most beloved National Artists: Benedicto Reyes Cabrera, more popularly known as BenCab, and Federico Aguilar Alcuaz.
This special exhibition would be expanded and travel to Silliman University in Dumaguete in 2019.
In August 2017, the Gallery staged the landmark exhibition titled ‘Mid-Century Moderns: Important Modernist Painting from the Philippine Art Gallery,’ which was the first to focus on the iconic institution in more than three decades. The PAG was the country’s first-ever gallery to focus entirely on abstract art, and was established in 1952. Its roster featured the Philippines’ first non-objective artists and the legendary ‘Neo-Realists’ who sought to express the new reality after World War II : H.R. Ocampo, Vicente S. Manansala, Cesar F. Legaspi, Romeo V. Tabuena, Victor Oteyza, and Ramon A. Estella.
The León Gallery next organized Elsewhere : 100 Years of Filipino Artists Abroad, featuring Miguel Zaragoza, Fabian de la Rosa, Nena Saguil, Macario Vitalis, Cesar F. Legaspi, Napoleon Abueva, among others.
In October 2018, León Gallery presented Nam June Paik in Manila the first Philippine exhibition of works by the Korean-American ‘father of video art’ at its newest premises, León Gallery International. It was in collaboration with Gagosian Gallery which has represented the Nam June Paik estate since 2015. Nam June Paik (1932 - 2006) was a visionary artist who foresaw the influence of the television screen and the internet not only on art but on the world at large. He quickly and presciently grasped that advances in consumer technology were not fleeting oddities but would have a lasting impact on culture and politics. Nam June Paik in Manila feature 24 pieces from 1983 to 2005, including several iconic objects that blur the lines between art and technology, the past and the future, philosophy, fame, and commercialism.
At the Art Fair Philippines 2019 the exhibition in the spotlight was the powerful yet playful Color Theory. Featured artists were : Roberto Chabet and Nam June Paik (both Ford Foundation / ACC Grantees); Carlos Cruz-Diez; Yves Klein; Yayoi Kusama; Alfonso Ossorio; Leo Valledor; and Fernando Zóbel. It was only in the 20th century that color came truly into its own as a recognized part of art practice. Thus, the exhibition presented artists from both the Philippines and abroad whose works have been characterized by the eloquent use of color.
Most recently in 2020, León Gallery presented “Leo Valledor : The Outsider of Park Place” at Art Fair Philippines. A pioneer of the minimalist art movement, Valledor was also an important figure in the New York art scene of the 1960s that created the free-wheeling, multi-media Soho art scene. He drew from his formative years not just in Kerouac’s San Francisco but also the communal charateristics of his Filipino background.

León Gallery is best known as the Philippines’ most trusted auction house. Since its first auction in 2013 and through its regular quarterly auctions since then, León Gallery has continued to establish and then exceed record prices for Filipino Old Masters as well as modern and contemporary artists.
Indeed, at the León Gallery Asian Cultural Council Auction in March 2018, a new world record was achieved for both José Joya as well as Philippine abstract art, when Joya’s extraordinary ‘Space Transfiguration’ (1959), his most famous and beloved work, achieved P112Million or USD 2.16Million, inclusive of buyer’s premium.The sum paid surpassed León Gallery’s own previous benchmarks.
In the Spectacular Mid-Year Auction in June 2018, another world record was set for Fernando C. Amorsolo with the exquisite ‘Under the Mango Tree’, which once belonged to the Melian Zobel and the sister of the man who sent Amorsolo to Spain to study at the Royal Academy of San Fernando in Madrid. This painting reaped a staggering P46.7 Million, or USD 934,000, a world record for the artist that outstripped a previous level set internationally of just P28 Million, or USD 539,000.
León Gallery, in fact, has the honor of holding the record of auctioning the six top-selling artworks in the country, beginning with BenCab’s P46Million (USD 939,000) opus in June 2014; the two remarkable paintings by Anita Magsaysay-Ho, the ‘Women amid the Banana Plantation’ at P49Million (USD 1 Million) in September 2017 and the larger ‘Fish Harvest at Dawn’ in 2014 for P52Million or USD 1.1 Million, and the previous record-holder for the most expensive piece of Philippine art to be sold in Manila, the massive Ang Kiukok ‘Fishermen’, which fetched P65.4 Million (USD 1.28 Million) in June 2017.